WhatsApp rises as a major force in news media 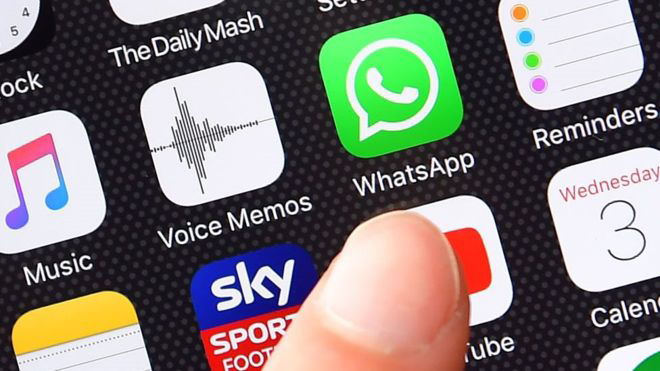 WhatsApp is becoming one of the prevailing ways people discover and discuss news, according to a study.

But use of the messaging app appears to vary widely between countries.

In Malaysia, more than 50% of those surveyed said they used WhatsApp for news at least once a week. But in the US, the figure was only 3%, and in the UK it was 5%.

The Digital News Report also indicates the Brexit debate has led to growing mistrust of the UK's media.

It said only 43% of respondents declared that the news could be trusted - down from 50% last year - with the BBC in particular criticised for having both a pro-EU bias and failing to expose the "distortions" of the leave campaign.

The research was carried out by the Reuters Institute For The Study of Journalism and covered 34 countries in Europe, the Americas and Asia, in addition to Taiwan and Hong Kong. It was sponsored by the BBC and Google among others.

A total of 71,805 people were questioned by YouGov in January and February to generate its data.

Facebook still leads, but WhatsApp is on the rise
Percentage of people using each service at least once a week 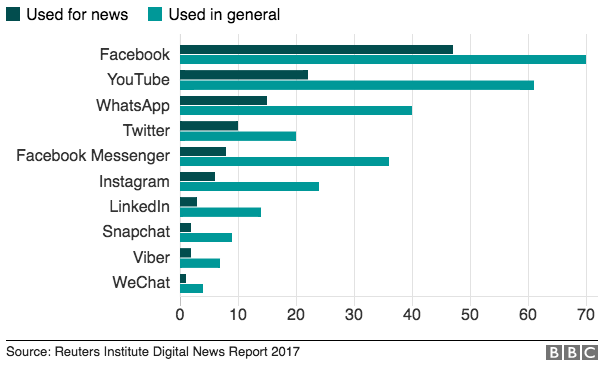 The results indicate that Facebook remains the most popular social media and messaging service for news engagement in all but two countries - Japan and South Korea - where, respectively, YouTube and Kakao Talk dominate.

But it adds that use of Facebook for news had dipped in more than half of all the territories where a year-on-year comparison was possible.

By contrast, sharing news stories and chatting about them appears to be on the rise within private instant messaging apps, and WhatsApp in particular.

According to the report, WhatsApp is now the second most popular social service for news in nine of the 36 locations, and the third most popular platform in a further five countries. 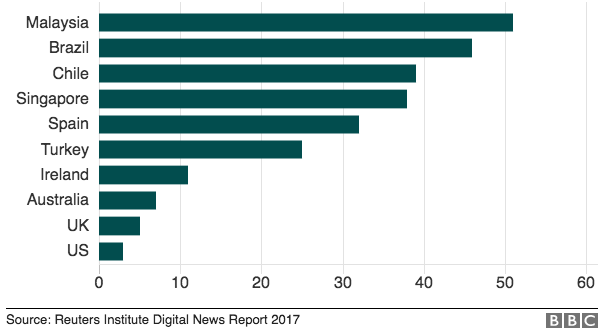 Its use of end-to-end encryption means messages can only be seen by their senders and recipients, offering users protection against being monitored by the authorities.

"Some of the biggest growth we've seen is in places like Turkey, where it's positively dangerous for people to express anti-government preferences on open networks like Facebook," explained one of the study's authors, Nic Newman.

"As a result people are using closed groups where they are more confident of expressing their views."

WhatsApp has also benefited from the fact that in much of Latin America and elsewhere mobile networks are offering unlimited data use within the program, so encouraging its use.

Furthermore, several Spanish and Chilean media outlets have embraced the app. Radio stations commonly ask listeners to send in short voice recordings via the service, and local news sites have added share-to-WhatsApp buttons to their pages.

However, Mr Newman said beyond that, it was difficult for the media to take advantage of the app's popularity beyond publishing stories that people want to share.

"You can set up branded areas or groups of people on your own, but it's incredibly clunky and time consuming, and there are few tools to help," he explained.

"And part of WhatsApp's appeal is that users don't get interrupted by brands, making it a very pure form of messaging. That's something [its developers] will really try to hold to."

Too close to power

It highlights users' suspicions that social media's lack of rules and use of viral algorithms have helped low-quality false stories spread quickly.

But it says there is also strong distrust of the mainstream media, in particular in Asian and central, southern and eastern European countries, where the industry is perceived as being too close to government. 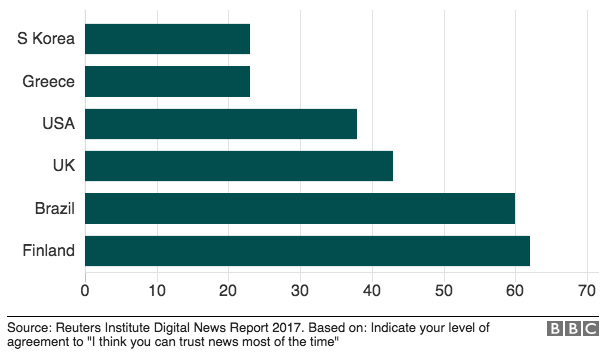 This year's Digital News Report is even more sobering than usual.

Many of the institutions that contribute to democracy in the West are undergoing a crisis of trust. News providers are no exception. UK citizens' trust in news "in general" has fallen by 7% since the Brexit referendum, the report suggests.

That is a worrying drop. Combine it with Reuters' revelation that the proportion of people paying for online news in the UK remains "among the lowest of all countries" surveyed, and alarm bells should ring.

One reason for this could be the BBC, whose dominance in our news ecosystem might mean fewer people feel the need to pay for good information.

For a new generation, the link between high-quality general news and payment for that news might be breaking.

The internet has made general, daily news a very common commodity. With tech giants like Facebook and Google eating ever more of the advertising pie, news providers may find they have to specialise if they are to get audiences to part with cash. And those audiences won't pay for content they don't trust.

Rebuilding that trust, in an era of digital echo chambers and fake news, is going to be tough. But it must be done.

Yahoo News remains the most popular online news brand, in terms of the numbers of people using it at least once a week, across the 36 markets as a whole.

It also ranked as the top online source of online news in the US, Japan and Taiwan.

Its success may have been driven in part by the fact many users said it was better at delivering "amusing and entertaining" content than the competition. 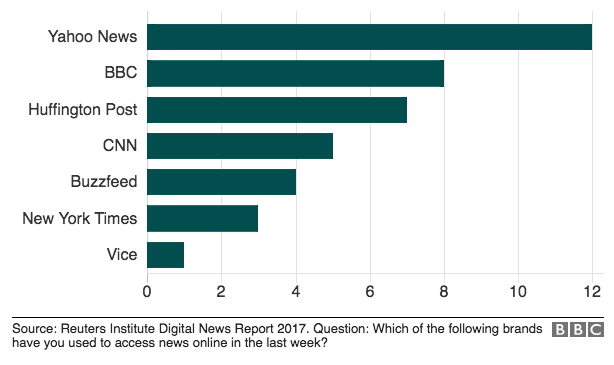 Other findings reported include:

The study said 84% of respondents had not paid for content in the past year.

However, it highlighted that there had been a "Trump bump" in the US, where several newspapers had attracted hundreds of thousands of new digital subscribers, many of whom have left-wing views and are under 35.

Another development that will be welcomed by the industry is that the use of ad blockers on desktop PCs appears to have stalled and remains low on smartphones, with only 7% of respondents saying they had installed advert removing software on their handset.

Moreover, a "tough love" approach taken by some publishers - whereby they block access to their content if an ad blocker is in use - appears to have convinced many users to at least temporarily suspend the plug-in's use.