This month, Snapchat introduced its latest update to users across the globe, Snap Map!

This new feature is designed to show your location to friends at all times, in as much detail as the physical street you’re in. So, will the new feature be a hit or is it another nail in the coffin to a nation's private life?

This new update was launched via a Snapchat message to users earlier in June.

“We’ve built a whole new way to explore the World! See what’s happening, find your friends, and get inspired to go on an adventure!”

Snapchat originally launched in September 2011 offering an innovative and private way to share short image and video clips with a selection of your friends. Over the last six years, it has released a number of features including stories and it’s most popular filters, which adopts the concept of augmented reality to allow you to add icons, masks and backgrounds to your photos.

With over 200 million active daily users, Snapchat soon became a giant in the social networking evolution however, in recent months, it has come under criticism for falling behind the times and losing daily users to competitors. Facebook’s Instagram in particular, gave the popular app a run for it’s money following their launch of Instagram Stories less than a year ago, which has already overtaken Snapchat’s user numbers. 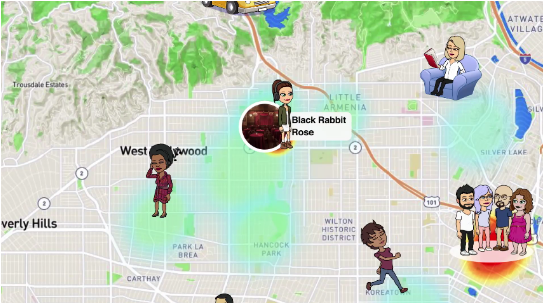 Although the launch of Snap Map has opened up questions on child safety and privacy, it has also been seen as a positive to businesses using the social networking platform to engage with customers.

Claire White, Account Director for Why Media explains; ‘Snapchat is a huge marketing tool for companies, especially those undertaking B2C campaigns as it allows them to engage with an impressionable audience who are generally loyal to brands they can relate to via the platforms they trust. The launch of Snap Map has been taken really well by brands as it now allows them additional awareness as a followers friends will pinpoint them in a specific store or event. It also offers brands an opportunity to directly target those currently within a store, or nearby, exclusive offers, making tracking Snapchat success rates and return on investment a lot easier.’

With regards to the negative comments about safety concerns, Snapchat has made it clear that this new feature is a discoverability tool and that location-sharing is off by default and is completely optional. Furthermore, it is not possible to share your location with anyone who is not your friend and Snapchat announced that they were not the first social media company to allow location tracking.

Overall, this is a powerful new tool for Snapchat, which currently boasts over 55 million daily users in Europe - 10 million of which are here in the UK.

If you are a forward thinking company looking to discover Snapchat for business then please get in touch with one of our Account Managers today via info@whymedia.com.