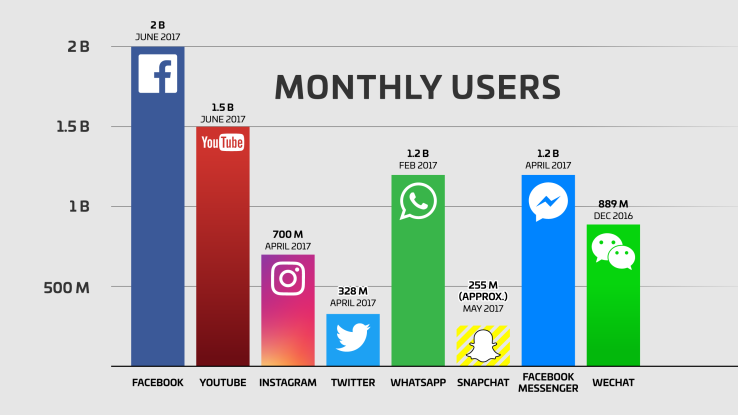 “We’re getting to a size where it’s worth really taking a careful look at what are all the things that we can do to make social media the most positive force for good possible,” Facebook Chief Product Officer Chris Cox told TechCrunch about the company’s new milestone. Thirteen years after launching and less than five years after hitting 1 billion, Facebook now has 2 billion monthly active users.

Facebook wants people to celebrate with a personalized “Good Adds Up” video they can make and share here. Meanwhile, Mark Zuckerberg played it cool with this brief announcement message.

Two billion makes Facebook the largest social app in terms of logged-in users, above YouTube’s 1.5 billion, WeChat’s 889 million, Twitter’s 328 million and Snapchat’s estimated 255 million (extrapolated from its December 2015 ratio when it had 110 million daily and 170 million monthly users). Beyond YouTube, only Facebook’s other apps have more than 1 billion, including WhatsApp and Facebook Messenger, with 1.2 billion each. Instagram might soon join that club as it recently rocketed past 700 million.

Facebook’s growth the last half decade has been fueled by the developing world. The company has relentlessly optimized its app for cheap Android smartphones and low-bandwidth connections. It’s added 746 million users in Asia and the Rest of World region since hitting 1 billion users total. Meanwhile, it only added 41 million in the U.S. and Canada. 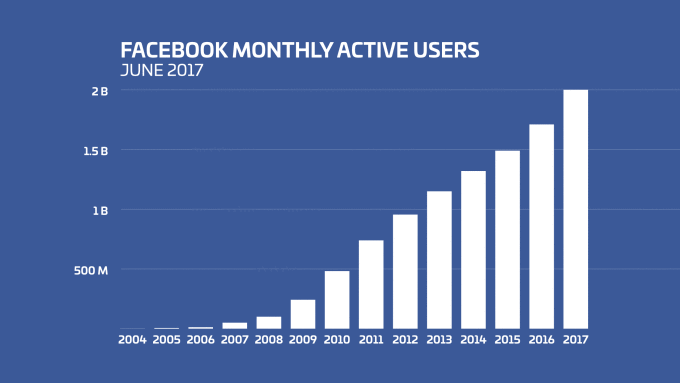 There are the big, newsy things like suicides on Facebook Live and fears that fake news got Donald Trump elected. But deeper down, there are even more complex ramifications of a near ubiquitous social network. It can propel internet addiction that alienates people, and facilitate the filter bubbles that polarize society by reinforcing our opinions. Facebook has largely conquered its competitors, giving it the slack to finally address the modern sociological challenges that stem from its popularity.

Cox says an important pattern Facebook is adopting is “When you think about very complex systems that are affecting humanity, just being open about what’s happening. And then for example in the case of something like suicide or bullying, going and working with subject matter experts, getting the research on what’s the best possible thing that we can do, and then talking to the world about it.” To make the discussion about these tragic moments as accessible and productive as possible, Facebook has taken to publishing transparency reports and explainers about its policies and procedures.

“I live with the constant goal of understanding, for every single thing that we do, how do we maximize all that goodness, and curtail any way that it can be misused or turned into something sad” Cox solemnly concludes.