Google Pixel Has Launched, But How Will it Rival Apple? 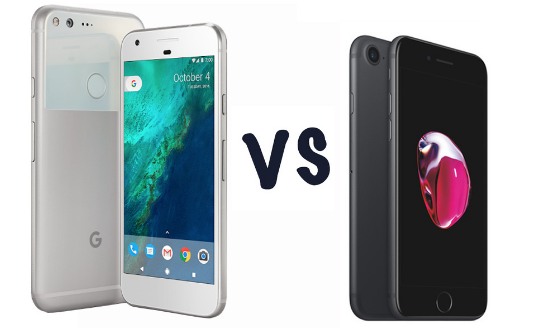 Brian Rakowski, vice president of product management at Google says "With Pixel, we obsessed over every detail, from the industrial design to the user experience,". Google describes Pixel as an “experience” combining hardware and software, including all your favourite Google apps to bring you a fast, seamless, and easy-to-use experience. Pixel claims to have highest rated smartphone camera ever, battery life that lasts all day, unlimited storage for photos and videos and it’s the first phone with built in Google Assistant, the latest iteration of a virtual assistant designed by Google. Even with this exciting new release, we still cannot ignore the main competitor that Google is coming up against. With many features similar to that of the newly released iPhone 7 , it becomes necessary to compare the Pixel to one of the biggest dominators of the smartphone market, Apple.

Pixel and iPhone 7 look remarkably different. Both phones are solid, premium and well-built however the Pixel offers a combination of aluminium and glass, with a fingerprint sensor on the rear, while the iPhone 7 is aluminium and places its fingerprint sensor within the Home button on the front. The iPhone 7 is water and dust resistant to IP67, while the Pixel is only IP53, meaning it cannot be submerged. A notable difference is the presence of a headphone jack on the Pixel, something that apple ditched in the latest iPhone 7 which caused quite a bit of controversy among Apple users. The iPhone 7 is also slightly lighter than Google’s Pixel, weighing just 138g against 143g.

The Google Pixel has a 5-inch display with a 1920 x 1080 pixel resolution for a pixel density of 441ppi and uses AMOLED technology resulting in rich and vibrant colours. The Apple iPhone 7 has a 4.7-inch LCD display with a 1334 x 750 resolution, resulting in a pixel density of 326ppi. Based on the figures alone, Pixel should be the better candidate with sharper and crisper images, but in reality, the iPhone 7 display is still one of the best around, despite a lower resolution compared to its Android counterpart. A display feature of the iPhone 7 that puts it further ahead of Pixel is 3D Touch, which is Apple's version of a pressure sensitive display. Users will get access to different features and functions based on the force with which they press.

Both phones rival very closely in terms of camera quality. Both have a 12-megapixel rear camera with only a slight difference between the two. The iPhone 7 has a slightly wider aperture of f/1.8, which lets in more light, while the Pixel has to contends with f/2 aperture. Both cameras have phase-detection autofocus, but the iPhone 7 features a quad-LED flash, while the Pixel benefits from just dual-LED. In terms of the front-facing cameras for selfie enthusiasts, the Pixel has an 8-megapixel f/2.4 sensor with 1.4 pixels, while the iPhone 7 has a 7-megapixel f/2.2 sensor with a Retina Flash.

The Pixel is available in 32GB and 128GB storage options compared to iPhone 7 with 32GB, 128GB and 256GB options. In terms of battery, the Pixel has a 2770mAh capacity, while the iPhone 7 is actually smaller at 1960mAh. The Google Pixel runs on Android 7.1 Nougat and it features Google Assistant built-in, accessed via a long press of the home button. iPhone7 operates on iOS 10 and similarly, In terms of personal assistant, the much loved Siri is still available and is accessed via a long press of the physical Home button.

Ultimately, in terms of figures, the Pixel trumps the iPhone on display size, battery capacity and front-facing camera resolution. The iPhone trumps the Pixel in terms of waterproofing, display functionality, storage options and it’s reputation for having a fantastic camera, while Pixel still needs to prove itself. Leah Hickey, Digital Marketing Account Manager at Why Media says “While Pixel appears to be a fantastic new innovation I think the decision between these two devices will ultimately come down to which design and platform the user prefers. Those of us who are devoted Apple users at heart will be hard to be swayed towards Google however for those enjoy Google software on a daily basis, the Pixel is a great choice”