As the United Kingdom awakens to a shock result in the EU Referendum in which Britain has narrowly voted in favour of leaving and David Cameron announces his plans for resignation, reactions from the advertising industry have begun to emerge.

The Institute of Practioners in Advertising (IPA)

Paul Bainsfair, director general of The Institute of Practitioners in Advertising (IPA), was disappointed with the result but remained optimistic for the future of the industry.

He said: "As an industry we had hoped that the referendum would have kept us in the EU, however, we believe the UK will continue to lead the world with its creative industries and advertising in particular. We have always been known and admired for our inventiveness and ideas. It will now be more important than ever that we continue to demonstrate these valuable traits."

Paul Framptom, chief executive of Havas Media Group UK, tweeted his shock at the result and maintained that the prime minister should not have taken the decision to step down. 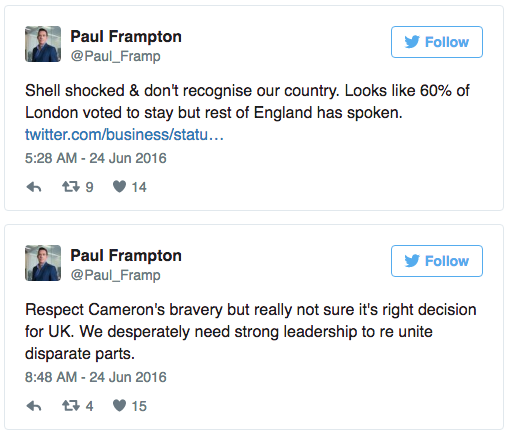 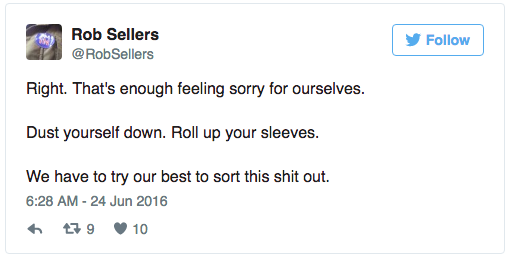 He said: “As the UK voted to leave the EU after 43 years. Advertisers will be assessing if this means advantage or problems to come.

“First, this is a decisive result reflecting a call for change. Secondly it is not clear what change will look like in the short term or the final new relationship with Brussels.”

Discussing how the vote could impact the advertising industry he said: “The UK ad industry remains strong as a global player and we are confident that this vote provides significant opportunities as the dust settles.

“We now start a two year period whilst we agree with Brussels what our relationship will be. There will be a great deal in terms of advertising and consumer law that came from the EU that will remain in UK law.

“Whether pleased, surprised or saddened by this vote to leave Business should do what good and successful business does...

“It is business as usual, we are in the EU for at least 2 yrs and may be longer. Rash decisions in business or politics rarely pay off' Ian Twinn director of public affairs.

“As we enter a transition period in leaving the European Union, the impact on retailers and consumer prices remains to be seen. Whilst we may see a short-term impact in consumer confidence, most businesses will have a contingency plan in place and there is no reason why long-term success should be impacted by the referendum outcome.

"In our recent Retail CEO survey, conducted ahead of the vote, 43 per cent of respondents said their growth plans were not at all dependent on staying in the EU. While currency impacts causing prices to rise or margins to be squeezed and the impact on imports from the EU were highlighted as the top concerns of CEOs."

Sachiko Scheuing, co-chair of FEDMA and European privacy officer at Acxiom, warned that Britain’s contribution to eprivacy would be greatly affected by the result.

“Now the UK has decided to leave, that expertise will be unable to continue to add value to for instance the ePrivacy directive in the same way moving forward.

“The UK government will now have to establish a fresh approach to how it intends to approach its data protection legislation as a non EU member without the backing of the EU collective.”

Scheuing added: “A potential advantage of the decision to leave is that the UK can now explore the flexibility to apply a modified version of the GDPR and provide adequacy for EU member states. It also allows the UK’s famously pragmatic approach to data protection to continue. Whilst some regulatory consistency will be lost, the implementation of a “GDPR lite” will certainly give the UK a competitive advantage for UK businesses in non-European locations.”

Tim Martin, founder and chairman of Wetherspoon's, said: “The referendum result will enhance freedom and security.”

“Some people will now be anxious, but concentrating on these immensely important factors will provide reassurance. Anxiety about the economic effects of independence during the campaign was misplaced.

“The UK will thrive as an independent country, making its own laws, and we will work with our good friends and neighbours in Europe and elsewhere to ensure a positive outcome for all parties.

“The most important factor now is to work together for our mutual benefit. On a practical level, from my experience of running a business, the key factor now is to avoid the appearance and the reality of rushing to ‘do a deal’ with the EU.

“There is plenty of time and the UK is in an immensely strong position. A period of calm, reflection and discussion will be beneficial.”

Al Moseley, president and chief operating officer of 180 Amsterdam, pointed out that his ad agency position within the EU means it can “offer a better alternative to the UK for clients wanting to take their brands to the European market place.”

He maintained that there would be “no impact on current campaigns” and asserted that “brands will keep on investing.”

Jenny Biggam co-founder of independent media agency, the7stars, voiced her concerns over the impact on both large and small media agencies.

Biggam said: “Turmoil in the financial markets over the next few weeks is inevitable and we can’t disassociate the advertising industry from the wider economy – our clients’ share prices have been hit and that won’t be good for advertising budgets.

She added: “The ad market needs a stable economy because ad spend is fuelled by consumers’ spending power. In the short term I think Euro 2016 will continue to buoy adspend. Longer term I am hoping for stability and for business and politicians to collaborate more closely to avoid recession.

Tim Lefroy, chief executive of the Advertising Association, has remained optimistic in his outlook following the result. He said:

“UK advertising will adapt and continue to lead the world.  Our sector is outward looking, open to trade and attractive to global talent and with the right support from Government, will keep growing, creating tens of thousands of jobs and building on the £4.1 billion in advertising services we already export.  First up is the imminent strategy for our Creative Industries – the UK’s fastest growing sector - and we look forward to advertising being right at the heart of it.”

Ajaz Ahmed, CEO of digital agency AKQA, sent out a memo to employees following the result.

"The world has always benefitted from diverse, multi-cultural, international teams that have different backgrounds, perspectives and ideas.

"Diversity is at the very core of our company, supporting and strengthening our culture and reinforcing our reputation as an employer of choice. We work with progressive clients around the world that share the same values, creating a ripple effect that extends far beyond any of our own organisations.

"This morning we woke to the news that Britain has made the historic decision to leave the EU. The full impact of this decision will depend on the negotiations that follow and, importantly, there will not be any immediate changes.

"There will be much noise and speculation over the coming weeks as no state has ever left the European Union before. Frankly, no-one can say with any certainty what rights EU citizens will have to work in the UK, or vice versa, until the negotiations have been completed. These negotiations could take anything from between two to four years. There have already been promises made for EU citizens lawfully resident in the UK that they will be treated no less favourably than at present. Lawyers have also argued that British expats living in the EU at the time of the vote would have acquired rights to allow them to stay in their host country. In addition, countries outside the EU (such as Norway) have been required to grant freedom of movement as a condition of access to the single market.

"As an international firm, AKQA will continue to nurture and grow our presence and commitment in Europe, USA, Asia and UK. We will continue to encourage our employees to travel with us, benefitting from new experiences and cultures.
I am writing to you personally because no AKQA employee should ever feel unsupported.

"We will do everything to ensure we carry on building a diverse and inclusive culture, represented by people from all over the world, so we seek terrain unexplored and create inspiring work.

"In addition to our own resources, AKQA is proud to be part of WPP, an organisation that employs over 194,000 people globally.

"If you have questions, concerns or need anything please contact me at anytime.